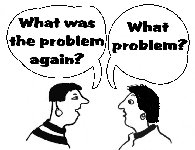 The representational systems in NLP are simply enough the five senses. We represent the world using the visual (images), auditory (sounds), kinesthetic (touch and internal feelings), gustatory (tastes) and olfactory (smells) senses. We picture ourselves lying on a sunny beach, hear the voice of the lifeguard yelling, feel the sensation only sand in your bathing suit can produce, taste the soggy egg salad sandwiches we brought for lunch and smell the aroma of the surf wafting into our nostrils. Our thinking consists of these images, sounds, feelings and usually to a lesser extent, tastes and smells. The entirety of our experiences have been recreated through these senses in our memories and govern our capabilities and beliefs.

Curiously enough, our predominant representational system in a given context often shows up in our language, for example: Responding to the statement: I think the Jensen project is going well.

Visual: Yep, looks good to me.

Auditory: I been hearing good things about it.

Kinesthetic: I feel good about the whole project.

Gustatory: I can taste the victory.

The qualities or attributes of the representations you make using your five senses are submodalities. For example, make a picture of someone you love in your mind. Now, make the colours more intense and notice how it affects you response to it. Now make it black and white and notice your response. Return it to its original shades and hue and bring the image closer. Now move it farther out. Return the picture to its original state, noticing how each of those experiments affected your response. Submodalities are the fine tuning to your representations and can be used to create powerful changes.

The interesting thing to note here is that once you understand that you create your internal world, you realize you can change it.

Very simply, the meta-model is set of questions designed to find the explicit meaning in a person's communication.

Therapist: Who hurt you?

Therapist: How did he hurt you?

He wouldn't take out the rubbish out to the bin like I asked him to.

Many of us would have assumed we knew what was meant by "He hurt me,”  based on our own experiences. By having the ability to find other people's meaning in their communication, we can be more capable in communicating with them.

A person's thought process is very closely tied with their physiology. A dog senses your fear: how did he know if you didn't tell him. If a friend is depressed, most of us can tell without even talking with them. We pick up clues from their body: slumped shoulders, eyes downcast, head down, lack of animation (and in extreme cases, a loaded pistol held to the head). Sensory acuity takes these observations beyond the more obviously recognizable clues and uses the physical feedback in addition to someone's words to gain as much from communication as possible.

A set of linguistic patterns derived from Milton Erickson, the father of modern hypnotherapy. These language patterns are used to help guide someone without interfering with how they are experiencing it in their minds. For example, "Think of time you were laughing." It doesn't define when or how hard you were laughing so it applies to everyone. The Milton-model helps with maintaining rapport and is often used in hypnotic or trance state sessions.

Metaprograms are filters through which we perceive the world. The old maxim, is the glass half full or half empty is an example.

Another example would be how two different people might approach an argument. A person with what we would call an "away from" strategy would be likely to be finding any way to get away from the conflict. Someone using a "toward" strategy would be more likely to be heading toward a specific goal, perhaps of finding an amicable solution to the conflict. The primary difference between the two being, when you're moving away from something, you never know what you may back into.

When you change these filters, it can dramatically change how we approach situations and how we perceive the world.

NLP stands for Neuro-Linguistic Programming, a name that encompasses the three most influential components involved in producing human experience: neurology, language and programming. The neurological system regulates how our bodies function, language determines how we interface and communicate with other people and our programming determines the kinds of models of the world we create. Neuro-Linguistic Programming describes the fundamental dynamics between mind (neuro) and language (linguistic) and how their interplay effects our body and behavior (programming).

NLP is a pragmatic school of thought, that addresses the many levels involved in being human. NLP is a multi-dimensional process that involves the development of behavioral competence and flexibility, but also involves strategic thinking and an understanding of the mental and cognitive processes behind behaviour. NLP provides tools and skills for the development of states of individual excellence, but it also establishes a system of empowering beliefs and presuppositions about what human beings are, what communication is and what the process of change is all about. At another level, NLP is about self-discovery, exploring identity and mission. It also provides a framework for understanding and relating to the “spiritual” part of human experience that reaches beyond us as individuals to our family, community and global systems. NLP is not only about competence and excellence, it is about wisdom and vision.

In Essence, All of NLP Is Founded on Two Fundamental Presuppositions:

1. The Map is Not the Territory. As human beings, we can never know reality. We can only know our perceptions of reality. We experience and respond to the world around us primarily through our sensory representational systems. It is our 'neuro-linguistic' maps of reality that determine how we behave and that give those behaviours meaning, not reality itself. It is generally not reality that limits us or empowers us, but rather our map of reality.

2. Life and 'Mind' are Systemic Processes. The processes that take place within a human being and between human beings and their environment are systemic. Our bodies, our societies, and our universe form an ecology of complex systems and sub-systems all of which interact with and mutually influence each other. It is not possible to completely isolate any part of the system from the rest of the system. Such systems are based on certain 'self-organising' principles and naturally seek optimal states of balance or homeostasis.

All of the models and techniques of NLP are based on the combination of these two principles. In the belief system of NLP it is not possible for human beings to know objective reality. Wisdom, ethics and ecology do not derive from having the one 'right' or 'correct' map of the world, because human beings would not be capable of making one. Rather, the goal is to create the richest map possible that respects the systemic nature and ecology of ourselves and the world we live in. The people who are most effective are the ones who have a map of the world that allows them to perceive the greatest number of available choices and perspectives. NLP is a way of enriching the choices that you have and perceive as available in the world around you. Excellence comes from having many choices. Wisdom comes from having multiple perspectives.

Some Key Principals of NLP

NLP is based on many useful presuppositions that support the attitude that change is imminent. One of the most important is, NLP is about what works, not what should work. In other words, if what you're doing isn't working, try something else, anything else, regardless of whether what you had been doing should have worked. Presuppositions are beliefs that someone practicing NLP will find useful for creating changes in themselves and the world, more easily and effectively. The emphasis here should be on "useful" not whether each one could be proven to be "true". Practitioners of NLP often include different presuppositions in their list but what follows are the most common.