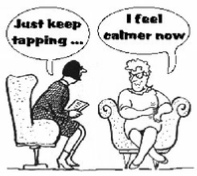 MPC challenges our frame of reference about the mechanisms of psychological dysfunction and therapeutic change. This new paradigm suggests that emotional problems are rooted in disturbances of the body/mind energy system. With roots in clinical psychology, Applied Kinesiology and Traditional Chinese Medicine, MPC uses cognition, affect and a non-invasive treatment of the acupuncture meridians to resolve emotional disturbance.

In order to interpret the rapid healing which occurs the theory underlying this innovative approach offers explanations drawn from quantum physics, information-processing models, and leading-edge biological research. The resulting therapeutic effects are remarkably quick and fundamentally thorough. The approach has proved itself through wide-scale clinical results in North America, Europe and Australia.

There are a number of different types of MPC, and an outline of some of them is given below

Thought Field Therapy (TFT), originated by Californian clinical psychologist Dr. Roger J. Callahan, is now in its twentieth year of development. A radical departure from contemporary psychotherapeutic practice and theory, TFT is best described as a natural, non-invasive, drug and chemical free system for the elimination of negative or unbalanced emotion.

The concept and theory of the "Thought Field", the framework in which the causative agents of psychological disturbance exist, was proposed by Dr. Callahan to explain the observations he was making when applying the first successful treatment procedure, a rapid and easily replicable cure for most phobias. He had been treating a patient, Mary, using conventional psychotherapy for eighteen months. Her fear of water was so overwhelming that she was forced to remain in an inner room of her house whenever it rained and could just about face bathing in a few centimetres of water. Cognitive and behavioural approaches had succeeded in getting Mary to cope with her phobia to a limited extent in that she could at least approach open water, but the intense fear remained. Mary described this as being focused on her stomach.

At that time Dr. Callahan was studying Applied Kinesiology (AK) techniques. He decided to apply pressure to an AK treatment point on the stomach meridian, just beneath the orbit of the eye, by finger tapping on that point. Expecting nothing from such a treatment Dr. Callahan comments,

"I was totally unprepared for what happened. As I tapped under her eye, Mary said, "It's gone, my fear of water, it's gone! I don't have those awful feelings in my stomach any more." I suggested that we go down to the swimming pool adjacent to my office to see if this was really true. I expected her to resist as usual, but in fact had to hurry to keep up with her. For the first time in her life, she bent down, put her head close to the water and began splashing it on her face."

Dr. Callahan acknowledges the work of Dr. George Goodheart, the originator of Applied Kinesiology, as being fundamental to the further development of TFT from this very significant beginning. Using AK principles a causal diagnostic procedure was developed which revealed concrete evidence of the nature of the Thought Field. From this, and the empirical evidence obtained from many hundreds of successful TFT treatments, the concept of ""perturbations" within the Thought Field was established and the crucial significance of the state of psychological reversal (PR), a literal reversal of meridian polarity, was determined. A revolutionary new addition to this paradigm, treatment of PR doubled the success rate of treatments. Causal diagnosis also revealed specific treatment sequences (algorithms) which proved to work on up to 80% of individuals. These algorithms form the foundation of TFT practice, causal diagnosis being the middle level of proficiency with a success rate of around 95%, With the use of Dr. Callahan's Voice Technology, the success rate rises approaches the ultimate even in the most difficult of cases.

TFT theory states very simply that if an individual suffers distress when thinking about a problem their thought field has perturbations within it. The Thought Field itself is regarded as tunable manifestation of the body energy system which contains active information for the generation of equally specific emotion. A perturbation in this context is defined as the discrete entity carrying the active information responsible for triggering the expression of negative emotion when the Thought Field is attuned. Hence, removal of the perturbations from the Thought Field leads to loss of the negative emotion, the individual can still think about and discuss their problem but now without the accompanying distress.

That removal is achieved by finger tapping on specific energy meridian points in a precise order determined by predefined algorithms or, on an individual basis, by causal diagnosis.

It is very rare for any form of psychotherapy to be demonstrated in public and on demand. The inherent unpredictability of conventional approaches is one reason, but one might also say that it is very safe to make strong claims for a particular approach if it is never exposed to unannounced and public scrutiny. TFT, however, has been demonstrated in public (and with sceptical strangers) since its inception, in the secure knowledge that it has highly predictable results and an extraordinarily high success rate.

EFT is a therapeutic approach to discharging excess emotional distress and liberating one's natural growth process. It has its roots in ancient Chinese medicine and the modern science of Applied Kinesiology. The basic theory is that the cause of all negative emotions is a disruption in the body's energy system..

By correcting the disturbance on an energy level we simultaneously correct it on the emotional level. These techniques are gentle, rapid and startlingly effective. New or old emotional upsets can often be released in less than half an hour! Similarly, life-long phobias, compulsive behaviours and unhealthy patterns of belief can be eliminated.

Be Set Free Fast is a highly focused Energy Therapy method for eliminating the negative emotional roots and self-limiting belief systems which are embedded in the subconscious mind, and which are "locked" together by specific energy circuits. These unresolved negative emotions and beliefs create and maintain psychological and physical symptoms which can result in life adjustment, mental, emotional, physical, and spiritual problems, including medical, and health problems.

BSFF readily eliminates the same emotionally-based problems as all of the Energy Therapies. It is believed that BSFF works at deeper psychological levels than other Energy Therapies by specifically and purposefully treating the unresolved emotional roots and the belief systems which are operating automatically in the person's subconscious mind. BSFF uses only one four-step algorithm (treatment sequence) to eliminate every identified problem. Another ten-second procedure resolves un forgiveness.

The simple, gentle BSFF procedure was developed and refined over the past nine years by Larry Phillip Nims, Ph.D., a clinical psychologist who was trained in the "Callahan Techniques" in 1990. Dr. Nims was among the first few professionals trained by Dr. Callahan, and has been in the forefront of new developments in the Energy Therapies.

BSFF directly addresses the subconscious processes that establish and trigger debilitating and dysfunctional reactions. It rapidly and gently eliminates problems, even when the person does not know what the problems are. All that is required is that the client notice a "problem" with their conscious mind. Focusing conscious attention on the problem during treatment is not required. There are typically between 700 and 1900 emotional roots to any specific problem in adults, and somewhat fewer in children. Each BSFF treatment sequence simultaneously eliminates all of these roots, collectively, for each problem.

Many treatment issues may have multiple problems (sometimes called aspects) to treat, including those that are called Psychological Reversals. Psychological Reversals are treated with the same algorithm as all other problems. This allows for a seamless treatment sequence which is easy for clients to understand and to execute, and it optimises the likelihood that clients will use the treatments on their own.

What Happens during a Treatment?

During the actual treatment of a problem, I will ask you to focus on the distressing thought or feeling that you want relieved. (This will only last a few minutes.) I will then show you how to tap on precisely the correct points on the upper body in precisely the correct order that will introduce vibrational energy into specific Energy Meridians. In most cases, you will feel your distress level about that problem dissolve right then and there.

There are no needles, no lying down, no repeated emotional catharsis, and no medications required.

A typical TFT algorithm treatment is conducted as follows:

The client is asked to think about their problem, thereby evoking any accompanying distress or discomfort. They are then asked to score that emotion on a 10 or 11 point Subjective Units of Distress (SUD) scale. 1 or 0 on these scales respectively is  defined as the total absence of distress, with 10 as the maximum. Children are asked to point to a position on a SUD chart or 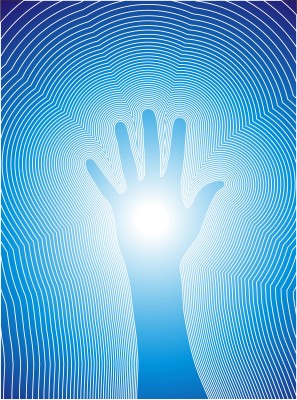 indicate the dimensions of their distress with their hands, in the same way as a fisherman would indicate the size of a fish. The client is then asked to use two or three fingers to tap firmly, five to ten times, on specific meridian points as defined in the appropriate TFT algorithm or diagnosed sequence. For example, these might be under the eye, just below the collarbone, the back of the hand, etc.

At this point the client is asked to evoke and score their distress once more. In an uncomplicated treatment a client who reported a SUD of 10 to begin with will now report a 7.

A sequence known as the 9-gamut is then applied. The client taps a meridian point on the back of the hand continuously whilst a series of nine actions, including various eye movements, are carried out.

Once again the client is asked to evoke and score their distress. Typically, the SUD will now be reported as a 4.

The specific algorithm or diagnosed sequence is then repeated.

In a successful treatment the client will now report a SUD of 1 or 0. Quite often, say that they can no longer think about their problem. This is, of course, impossible (as the act of trying means that they are thinking about it) and so is taken to be a SUD of 1.

As the reader will appreciate, to suggest that such a series of procedures will eliminate, say, a lifelong phobia is verging on the outrageous. It is for this very reason that TFT fails to enjoy a significant, if any, placebo effect. The vast majority of clients do not believe that the treatment will work. When it does, the effect on the client is so profound that they are at pains to deny that it was TFT that led to the resolution of their problem and offer alternative reasons for their recovery. In addition, the treatment procedures work with infants, young children and, it has been observed, with dogs, cats and horses . It is highly unlikely that a placebo effect would be significant in such cases.

Whatever the viewpoint, the effects of TFT are predictable, saltatory, replicable by anyone and take place within minutes.